In the province of North Kalimantan, on the Indonesian island of Borneo, the natural environment is facing destruction from the expansion of plantations, afforestation, and shrimp farming. The rapid increase in the number of shrimp farms in coastal areas has led to the successive felling of forests and mangroves, and the rapid environmental changes are threatening valuable wildlife species with extinction.
In 2006, responding to concerns over the loss of mangroves in North Kalimantan, Nichirei Fresh initiated the Forest of Life Project in cooperation with its local supplier, PT. Mustika Minanusa Aurora (MMA) and the city of Tarakan, on Tarakan Island. The project assists in planting efforts and biodiversity conservation, by selling shrimp cultivated traditionally without using formula feed or electricity, and donating a portion of the proceeds to MMA’s Mangrove Foundation. In partnership with WWF Indonesia and WWF Japan, Nichirei Fresh is currently promoting activities improving aquaculture as part of the WWF North Kalimantan Sea and Forest Conservation Project. Over a 10-year period, trees have been planted across an area stretching 302 hectares in an effort to restore mangrove forests. This has resulted in an increase in wildlife, including small birds, crabs and small fish, and even proboscis monkeys introduced from outside the region have begun breeding naturally.

Please refer to the following website for further details.

Nichirei Fresh Forest of Life Project (Only available in Japanese)

Nichirei’s CSR activities include the purchase of forest credits to support forest preservation activities.
In gratitude for the earth’s abundance, which provides the ingredients for its products, Nichirei Foods runs a program to protect and develop forests. As of March of 2014, part of the proceeds of the program—called Good for Lunches! Good for the forest!—go for the purchase of CO2 credits. As of July 1, 2018, the forest conservation activities had supported a total area of 6,058,000 m2 (equivalent to about 130 Tokyo Domes).

Nichirei Foods: Good for lunches! Good for the forest!

Nichirei owns land near Lake Hibara in Fukushima Prefecture’s Urabandai region, and the company supports research on the natural environment in the surrounding areas and environmental and biodiversity conservation based on that research. Following the 1888 eruption of Mount Bandai, all vegetation disappeared in the Urabandai area, but with the passing of more than 125 years, one can see returning vegetation: red pine forests, white willows, reeded wetlands, and aquatic plant clusters in marshlands. The red pine forests continue to spread, having been planted in the Urabandai tablelands by people who want to see the return of greenery in the area. But the company’s land, as yet unforested, provides an academically valuable area for observing virgin nature as it transitions.
Nichirei has supported the research activities carried out, since FY2012, in the Urabandai area by the Natural Symbiosis and Regeneration Department of the Practical Education Promotion Center’s Research Division at the Fukushima University Graduate School of Symbiotic Systems Sciences. Since FY2014, the company has been supporting the Fukushima University Graduate School of Symbiotic Systems Sciences Research Division’s project, to determine research models for the preservation of natural environment in transition as a natural heritage site, namely, research on humans and the natural environment (preservation of biodiversity) in Bandai’s Asahi National park. This is not limited to company land. The results of a wide variety of research—including that on plants and insects in lakes and swamps in the Urabandai area, as well as an analysis of sediment in the bed of Lake Inawashiro in the Inawashiro area—has enabled Nichirei to confirm that several species are endangered, and to learn the partial history of the formation of Lake Inawashiro. Further, the rarity of the natural environment in these areas is becoming increasingly apparent as, for example, when a dragonfly was found with characteristics that are vastly different to those known today and which has a high probability of being a new species.
During FY2018, for the purpose of considering future initiatives on lands owned by the company, Nichirei checked on the conditions of these lands, led by a professor from Fukushima University. The check revealed a particularly rich variety of dragonflies and a good water environment. In addition, the company donates to the Sparkling Water Bandai Mizumirai Fund (Inawashiro Lake/Urabandai Lake Aquatic Environment Conservation Measures Association), which promotes aquatic environment conservation in Lake Inawashiro and the Lake Urabandai basin. This fund disseminates information about the association’s activities, and seeks to pass along the lake Inawashiro and Urabandai wetland areas to future generations in their pristine condition by expanding the circle of understanding and support.

Activities to Protect the Endangered Cypripedium

The cypripedium rock orchid, designated an endangered species and once native to Nagano Prefecture’s Fujimi area, has seen a significantly decreased presence in its native habitat due to over-harvesting, damage caused by wild animals such as deer, and the impact of climate change. This caused alarm among Fujimi residents, and lead to the earlier-mentioned Fujimi Cypripedium Restoration Conference.
The Nichirei Group has been part of these activities from the start and, as a result of biotechnological applications, had increased the number of plants to around 30,000 by FY2012. Members of the Group and the restoration conference painstakingly grew orchids from seeds. Six years after the seeds had been sown, the orchids finally bloomed in mid-May 2014, and have continued to do so through to FY2019.
Having overcome the barrier of having the orchid flower for the first time indicates that there is a possibility that the initiatives so far undertaken to restore the cypripedium will expand. In addition, on February 4, 2019, Nichirei signed a “Biodiversity Conservation Partnership Agreement” with Nagano Prefecture, Fujino-machi, and the Fujimi-machi Cypripedium Macranthos Regeneration Council. It seems that major impetus has been provided for other protection activities, and that the Nichirei Group will continue to protect the cypripedium. 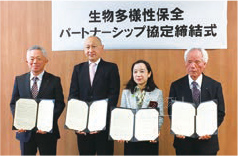 Since FY2004, the Nichirei Group has helped in the conservation and regeneration of the endangered orchid Cypripedium macranthos var. Kamanashi hotei and other species through research on and the breeding of, orchids and other plants in Fujimi-machi, Nagano Prefecture.
In FY2015, some orchids of the genus Cypripedium macranthos var. Kamanashi hotei bore flowers by artificial propagation and, FY2019, they produced 103 blooms. As a result, Nichirei entered into a biodiversity conservation partnership with the Fujimi-machi Cypripedium Macranthos Regeneration Council in February 2019.
Under the three-year (April 1, 2019 to March 31, 2022) agreement, the Group will provide the technologies necessary for the conservation and regeneration of Cypripedium macranthos orchids and cover a portion of the costs.