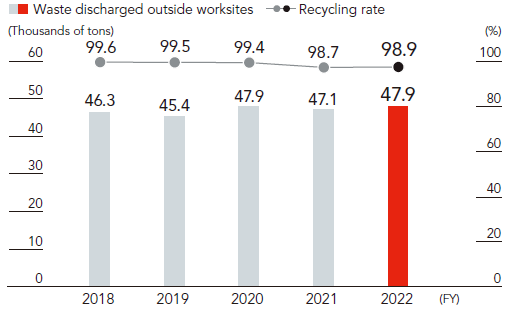 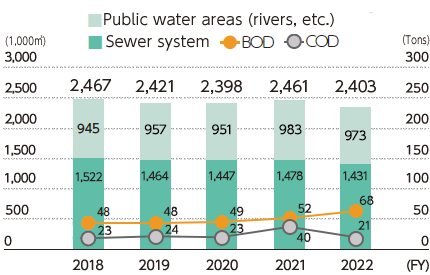 To reduce waste generated at our production facilities, Nichirei Foods is undertaking various initiatives. These include production management, initiatives to prevent problems, and the recycling of processing residue, such as raw ingredients not turned into products.
Processing residue is disposed of with in-house treatment machinery at our Funabashi plant, and recycled for use as fertilizer and feed. Our other factories entrust the processing of residues to recycling companies that turn the leftovers into fertilizer and animal feed. The Group plans to continue reducing the amount of waste generated by setting target values, while making the most effective use of processing what residue is inevitably produced.

In FY2020, there were no materials subject to notification under the Pollutant Release and Transfer Register* (handling volume of 1ton or more).
We will continue to properly manage chemical substances in the future.

Polychlorinated biphenyls (PCBs), a group of man-made compounds, were previously used as insulating oil in transformers, but their use was banned in the 1970s, after their toxicity became apparent. In Japan, equipment that has been confirmed to contain PCBs is being appropriately stored in compliance with standards set by law. Currently, disposal is being carried out systematically, based on the capacity of the nation’s five government-run PCB disposal plants. Three transformers collected from the Nichirei Group in FY2020 have been disposed of at a one of the government plants.

In addition to fulfilling the appropriate disclosure requirements when selling, buying, or renting land, the Nichirei Group does evaluations of soil contamination and carries out the appropriate management.
In FY2020, we conducted soil analysis and performed appropriate treatment in the construction of the Nichirei Logistics Tokai Inc. Nagoya minato DC.

In addition to the Group working to reduce CO₂ emissions at its places of b...

In FY2020, there were no legal violations or environment-related incidents,...

Since 2006, Nichirei Fresh has been engaged in the Forest of Life Project*1...